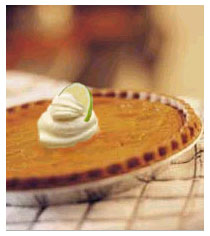 When I was in college, I had a sweet potato pie at Roscoe’s Chicken and Waffles that was so bad it compelled me to learn how to make my own. It was one of my first culinary epiphanies.

I’ve been using this sweet potato pie recipe for years. I found it on the Web a long time ago, so I’m not sure who I’m supposed to credit, but here it is:

For variety, you can top with 1 cup of toasted pecans and then drizzle the top of the pie with a little maple syrup before placing in oven.

(Picture courtesy of The Green Cutting Board.)