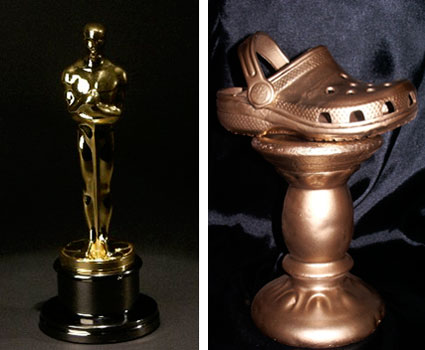 The Golden Clogs, a series of reverent and sometimes snarky food-related awards devised by writer Michael Ruhlman and renegade chef Anthony Bourdain, announced their nominees yesterday on Eater. The awards will be announced on Friday, Feb. 22 at the 2008 South Beach Wine & Food Festival in Miami Beach, Florida.

The nominees for the awards were determined Ruhlman and Bourdain by an “advisory board” that included chefs Mario Batali and Michael Symon, and food writers Russ Parsons, Ed Levine, Jennifer Leuzzi and Dara Moskowitz. The winners will be decided solely by both Ruhlman and Bourdain, but they also have the option of consulting with the advisory board for help if needed.

Check out some of the nominees with my picks in bold after the jump. See the full list of nominees at Eater.

For greatest achievement in pork, and/or guts
Nominees:

For being on Food Network and yet, somehow managing to Not Suck
Nominees:

For the chef/restaurateur who best multi-tasked, multi-platformed, merchandised, whored himself, or opened multi-units (either while impaired–or not) and yet STILL managed to protect the quality of the mothership–while continuing to make valuable contributions to the restaurant landscape
Nominees:

For most fame based on least actual culinary achievement
Nominees:

For the writer or blogger who actually GETS it
Nominees:

For the best example of twisted, repressed, or compromised “I’d rather be making lemon bundt cake with My Cat, Mr. Mufflesworth” journalist who actually HATES food and hates the people who make food even more
Nominees:

That’s just my opinion…what do you think?

One reply on “Who needs Oscar® when you can win a Golden Clog?”