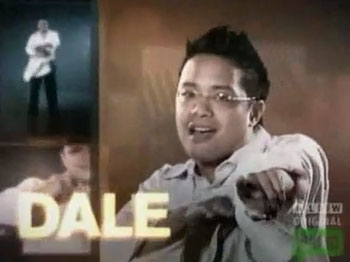 A friend sent me a link to another interview with Top Chef contestant Dale Talde, this time on BuddyTV.com. It covers some of the same ground as the Chow.com interview I discussed in my previous post, but he spent a good chunk of the interview defending himself amidst criticism that he only cooks Asian food.

In Season 2, Ilan Hall won the title of Top Chef by relying on his background cooking Spanish food. At least Dale was drawing from an entire continent for influence, not just a single country.

If Dale was bothered by anything, it was the criticism of his vision.

Criticize my execution if you want to. If my dish wasn’t good, fine, I’ll take it back. Don’t you in your life ever criticize my vision. It’s MY vision, not your vision.

Dale also said he had no problem throwing down with anyone if they wanted to cook Italian food or French food, but he finds that food boring because the flavors don’t “pop out” to him.

My flavors are big and bold and bright and in your face, and sweet, sour, salty come all at you. I’m not going to sit there and roast a piece of rack of lamb, and cook some noodles, and deglaze with white wine and shallots and then put it on a plate. That’s not who I am. Chilis…vinegar…miso paste. That’s what I do.

Dale was adamant about creating new dishes on the show instead of playing it safe.

Unlike some of my other competitors…I had never done some of that food before. I never did that food. Maybe that was a mistake of mine, too, from an execution standpoint. What I’m not going to do is sit there and recreate dishes that I did at my restaurant. I’m not going to do that. Why? Because it’s not about “Hi, you’re the best chef” and now bite every recipe off all these people. It’s about Dale making his own food and about putting my food in the forefront. Maybe I should have toned my style down, but I failed. I didn’t execute a good dish. The scallop dish was weak. I knew it was weak.

He also broke down his thought process on the ill-fated butterscotch scallop dish.

When you do a miso sauce, there’s a lot of sugar involved in it. The idea of caramelizing the sugar and turning it into a butterscotch and then adding miso…I like salty/sweet. It’s always a combination that I love. That’s what that is. Maybe not so good with scallops, maybe better off with something else like a piece of cod or something a little more savory?scallops have a natural sweetness to it. I had never made that before, and I put it on a plate and that was my downfall.

Ironically, I was watching on old episode of Iron Chef America the other day and Iron Chef Cat Cora, in a honey battle versus Citizen Cake’s Elizabeth Faulkner, caramelized some honey on top of a scallop successfully. So Dale may have been on the right track with the butterscotch…

Listen to the entire interview here.

thanks for writing an entry entirely about this.

@m: Yeah, what’s Antonia’s problem? Does she think that Asian food is somehow beneath the food that she cooks?

Even if Ilan was cooking Spanish dishes, a lot of his technique was classical and that’s what the judges look at. Good execution and classical technique. You don’t graduate from CIA and show off your wok skills.

@Dave: Agreed, but how does that justify Lisa or Spike remaining in the competition? Neither has shown good execution or classical technique, especially when you look at win/loss records on the show. Dale knows his ego and not gaming the system ultimatelly tripped him up, but from an execution/technique standpoint, he’s still miles ahead of Lisa and Spike.

True. I dislike Lisa’s attitude. I think Andrew is even better than Lisa.

Dale needed to keep his cool in the hot kitchen.

From what I recall, he won when he was paired up with Richard (Blais is way ahead of his peers in this competition and I’m wondering why Blais is even picked for this competition).

Dale won when he freakin made halo halo, how hard is it to make halo halo? Dale was complaining when they had to make a dessert and pulls out halo halo? If I was the Executive Pastry Chef for JG, I would laugh at his concoction. CIA teaches their students baking, pastries and desserts within their first year. What happened to those techniques? This is Top Chef people! $$$ and fame is on the line. Bring your “A” game and positive attitude! Just like Spike said “Stop being a little b*tch bro.”

Lisa is on the chopping block next!

@Dave: Dale didn’t win for the halo halo, but he was in the top 3 for that Quickfire. He won the Quickfire for the Film Food episode with a vegan sushi platter. He had three total Elimination Challenge wins, including the one with Richard. His other wins were the tailgating challenge with tandoori baby back ribs and the box lunch challenge for the Chicago Police Department with his lemongrass bison cabbage wrap.

Richard is definitely on another level compared to the rest of the chefs. He sees food from a completely different perspective and I think that’s why Dale respected him so much. Dale said in one these interviews that Richard and Stephanie were his two best friends in the house.

I was thinking about the past elimination round and Mai Buddha’s chance to have easily cross the finish line. With Spike and Dale being able to cook asian dishes, it was a sure touch down. But Dale had to have a sissy fit and Lisa can’t even cook sticky rice.