After making a large quantity of tocino in my previous post, I could’ve easily portioned out what I had on hand and kept the surplus in the freezer, but a friend was having a barbecue and sharing it was a much better plan. I started thinking of other ways to serve tocino since I wasn’t going to make my friends breakfast, and sliders were the first thing that came to mind.

When I Googled “tocino sliders,” I discovered that they were on the menu at Purple Yam, Chef Romy Dotoran and Amy Besa’s new restaurant in Brooklyn. Besa has said that Purple Yam’s tocino sliders, served with pickled persimmons on mini housemade purple yam pandesals, were inspired by Vietnamese bánh mì, which is simply grilled meat, pickled veggies, and fresh bread. This idea is fairly common—Momofuku Pork Belly Buns and Korean BBQ Tacos, and brats with sauerkraut also come to mind. My friend Steph (a.k.a. urbanfoodie), recently visited Purple Yam and said she liked their tocino sliders. 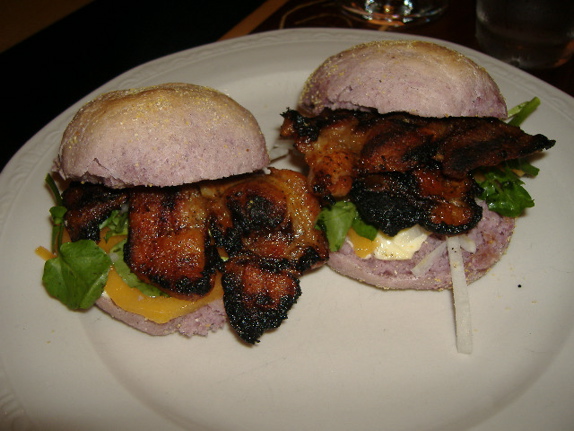 Although the tocino slider is a fusion concept, I wanted to keep the components as Filipino as possible. I love that Purple Yam uses mini pandesal for the bun, so I picked some up at the market instead of using the more obvious King’s Hawaiian Rolls. For the pickled vegetables, it was only natural that I make atsara (a.k.a. achara or pickled green papaya) to dress the sliders. The funny thing is, I had never eaten atsara in my life. In fact, I always hated pickles when I was a kid, but as an adult, I’ve grown to love other pickled vegetables. (Sauerkraut ended up being my gateway pickled vegetable.)

I knew I could’ve bought some atsara at the store, but I wanted to make it from scratch (recipe below). Luckily, Marvin at Burnt Lumpia has a great atsara recipe, and I would’ve followed it to a T if I didn’t buy the wrong papaya at the market. Atsara calls specifically for green papaya, and in my haste, I bought a couple ripe Hawaiian papayas that were ill suited for atsara. I didn’t realize this till around midnight, and the Asian supermarkets aren’t open that late, so I picked up some unripe green mangoes to substitute. I’m not sure if mango atsara is an actual “thing” in the Philippines, but it ended up being a great substitute. I’ll definitely use green papaya next time I make atsara. Mango was a nice twist to this atsara.

Since I had access to my friend’s grill, I grilled the tocino instead of pan frying it, and I think grilling is definitely the way to go. It will still be good pan fried, but if you can, grill them. I gave them a good sear for a couple minutes on each side and then finished them off on a cooler part of the grill. Grilled tocino is a good thing.

Assembling the sliders is easy. Cut the pandesal in half so they look like buns and then toast them to your preference. Put a slice or two of tocino on the bottom half of the bread and then top with the atsara.

Awesome awesome awesome Arnold! To my knowledge, pickled green mangoes is a “thing” in the Philippines, but I’m not sure it it’s still called atchara.

Thanks, Marvin. Hopefully someone will comment here with an answer. I think “atsarang mangga” is at least grammatically correct…but then again, my Tagalog sucks.

Looks delish! Omg, I can’t wait to try tocino on the grill — it’s like grilled liempo, breakfast style. Haha. Great take on the sliders, my friend!

We used to make pickled mango in Hawaii. Not sure if it was a Filipino thing or a Chinese thing… my guess is the latter.

Very creative idea to sub the mango. Just be careful, plenty people are very allergic especially using the green mango. I agree with Bryan, it’s probably Chinese origin here in Hawaii, although we’ve “localized” it over the years

ARNOLD, MANGO ATSHARA SOUNDS GOOD TO ME, I KNOW GREEN PHIL. PAPAYA IS THE TRADITIONAL ATSHARA,{ NOTE PHIL VARIETY), NOT HAWAIAIN OR MEXICAN, OR TASTE WILL BE TOTALLY DIFFERENT!!.. MAKE THIS TOO WITH UR TOCNO, WHEN U GUYS COME TO VISIT, OK??

Love the creativity. Looks delicious! Will have to make this soon.

Do you know http://www.yummy-cebu.com the food platform in Cebu?

My friends and I highly recommend it and urge you to give it a try!!!

Will definitely try the green mango atsara recipe. Good idea. Prefer cooking tocino and longanisa on the grill — less greasy, easier cleanup — just requires that you watch it constantly so they don’t burn.

tocino sliders = clever idea… I love the inclusion of pickled mango. pickled mango is done using :indian mango back home.. but i love your take just the same.
im glad i found your website…i will be here more often!

[…] listed as one of the vendors at this event. I had planned to participate, making either my Tocino Sliders or Korean BBQ Tacos, but I have family in town this weekend and didn’t have the time. I will […]

I love this idea but what else did you put on the sliders? It looks like cheese and some sort of sauce? Is it like a banana ketchup/mayo mix? Also, is that lettuce or spinach or…?