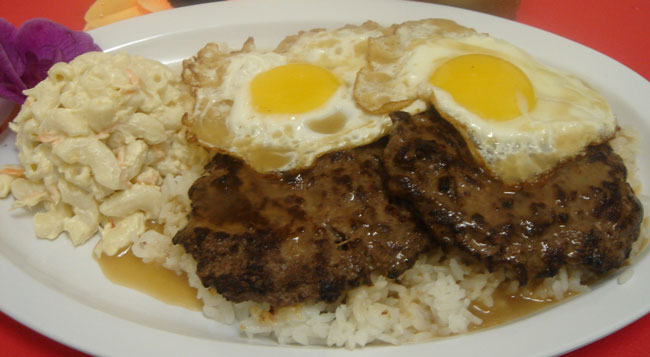 Trips to Oahu are annual since we’ve got to visit the family, and this also means good and CHEAP eats. If you’re planning on going to visit Oahu, here’s some places where you can eat like a local.

If Kapahulu Avenue was a baseball team comprised of restaurants and their lineup included Leonard’s Bakery, Waiola Shave Ice, and Rainbow Drive-In batting in the 1,2, and 3 spots, Ono Hawaiian Foods would be the clean up hitter waiting to drive them all in. There’s a reason Ono is an all the tourist books, and you know the place is good because the locals will put up with all the tourists to eat there.

Ono is THE place to get authentic Hawaiian food in Oahu. They’re known for their kalua pig and their enormous, almost plate-sized lau laus. And it’s not all taro leaves either…it’s a generous amount of pork, enough for two or three people to split. The pipikaula (Hawaiian beef jerky) is also excellent and something I’ll be ordering from now on. The ahi poke is fresh and wonderful and the butterfish luau was also really good.

Gina’s serves local-style Korean food, and it is one of my favorite places to eat in Hawaii because I love meat jun, which is almost impossible to find in this form on the mainland. Meat Jun is basically a really thin steak that’s dipped in egg batter and then fried. It’s kind of like a thin egg pancake with a sliver of steak in the middle. They serve it with a sweet dipping sauce that takes this humble dish to a whole other level.

On this trip, I paired my meat jun with some spicy fried chicken wings that were excellent. The crunchy, slightly spicy skin really hit the spot. In addition to rice, you get your choice of four sides, which include basic Korean banchan offerings such as taegu, kim chee and pickled daikon, as well as local favorites like mac salad.

It’s small inside, so most of their business is take out, which is what we did. Best of all, Gina’s is cheap and the portions are extremely generous, so you get a lot of food for the money.