Lawry’s the Prime Rib is a Los Angeles institution that has been serving basically one thing, beautiful roasted prime ribs of beef, since it opened in 1938. It made dinner a spectacle when Lawry’s founder Lawrence Frank invented the rolling silver serving carts that keep the meat fresh so that every diner can have their prime rib carved to order and served tableside. The Spinning Salad is kinda corny and isn’t that great, but watching the servers make it is always fun and adds to the “experience.” The restaurant was also a vehicle to promote Lawry’s Seasoned Salt, a key ingredient in the prime rib that is now a fixture in pantries and spice racks around the world.

I normally order the standard Lawry’s cut, medium rare, with creamed spinach and mashed potatoes. Yorkshire pudding is always puffy and golden brown and is great for picking up the excess jus. The food is almost always perfect, and the service is attentive, fast and hasn’t changed in decades. They hold several tables for walk-ins, but you should make reservations well in advance, and they’ve just started using Open Table for online reservations.

The Lawry’s dining experience makes it a great special occasion restaurant. In fact, my wife and I wanted our friends and family to enjoy the Lawry’s experience so much that we had our wedding reception there in 2005. If you’re willing to do a lunch reception, the food is so much better than hotel food, and it’s much cheaper than any other venue in the area. The entire Lawry’s staff was professional, efficient, and flexible, and they worked with our ideas to help make everything perfect. The great staff and service, coupled with family, friends and great food, helped make our reception truly memorable.

if you do decide to have your reception here, join Lawry’s VIP Rewards program. You get a $25 certificate for every 250 points ($250) you accrue, and these certificates are valid at any restaurant in the Lawry’s family. Let’s say you spend $10K on your wedding reception. This means you’ll get 40 $25 certificates. That’s $1000 worth of food! You can give them to friends, family, coworkers, or just keep them for yourself…we’ve had plenty of free meals courtesy of Lawry’s since our reception.

We all know that food tastes better when it’s free, but at a place like Lawry’s, it’s truly out of this world.

So what do you do when you bring home leftover prime rib from Lawry’s or any other high-end steakhouse? If you’re Filipino (or any Asian), fried rice is the usual destination of almost any leftover meat. I’ve made fried rice with all kinds of leftover meat, including chicken adobo, baby back ribs, barbecued brisket, and steak. Can prime rib be a viable fried rice meat? I was at my parent’s house when I decided to do this, and there wasn’t much to work with, so I decided to keep it simple: rice, garlic, meat, eggs and seasonings (Lawry’s Seasoned Pepper and some garlic salt). The directions are fairly simple. This simple preparation works great with almost any meat, and it would have been prettier if we had some green onions on hand. Since the prime rib is going to be cooked all the way through by the end of this process, it doesn’t really look all that special. But as long as you don’t completely overcook the meat, the prime rib is still going to be tender and flavorful and a lot better than using a cheaper, tougher piece of leftover meat.

And isn’t it just a little more decadent to say that you made some prime rib garlic fried rice?

What many people may not know is that this probably first happened when the entire Lawry’s the Prime Rib concept (menu, spinning salad, rolling silver carts, etc.), was copied and brought to the Bay Area when the beloved San Francisco institution known as the House of Prime Rib opened in 1949. Ultimately, the House of Prime Rib makes me sad for San Francisco. In a city that boasts some of the best restaurants in the world, is this really the pinnacle for prime rib?

I had the large, bone-in King Henry VIII cut and my wife had the standard HoPR cut, both medium rare (the only proper way to eat prime rib). I wish I could say good things about the meat, but it isn’t very good. It was just pale, gray and flavorless, and it didn’t melt in our mouths. It was just chewy…really chewy. I did cut off some of the meat that was still clinging to the bone, and these little slivers were the best pieces of meat of our meal.

The Yorkshire puddings were an utter disappointment. A proper Yorkshire pudding is very puffy and should look like it’s exploding out of the little serving skillets. HoPR’s were just flat…like a pancake. It still tasted good and was great for picking up all the extra jus. The spinning salad was nice but overdressed.

But it wasn’t all bad…

The sourdough bread they bring to the table is great and very San Francisco. The loaded baked potato was probably the best I’ve ever had, and the mashed potatoes were good but forgettable. Creamed spinach was very nice and rich, but my wife makes a better version of it (she doubles the bacon content and saves some for garnish).

The desserts are fantastic. The Chocolate Fantasy Cake is a decadent triple-layer cake of chocolate cake, chocolate mousse and cheesecake served with a chocolate and raspberry sauce. The creme brulee had a subtle eggy flavor and its light and smooth consistency was perfect.

HoPR is beloved by both locals and tourists, but the truth is, the meat is not up to par with places like Lawry’s or Morton’s. To be honest, I’ve had better prime rib at Outback.

In fact, I can guarantee you that I’ve made prime rib for Christmas dinner that was better than what I had at House of Prime Rib. And I’m talking about the whole meal, with real, puffy Yorkshire puddings, mashed potatoes and gravy, and creamed spinach laden with bits of Niman Ranch bacon. Maybe if you’re good this Christmas, you can come over and revel in this feast. 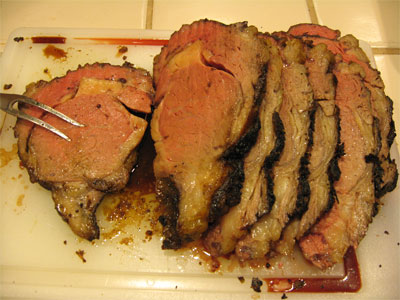 Perfect for entertaining a big group, I normally make my Prime Rib around the holidays. It’s a bit of work, but it’s worth it just to see the reaction on your guests faces when it arrives at the table. This is a combination of recipes from Lawry’s the Prime Rib and Cook’s Illustrated. 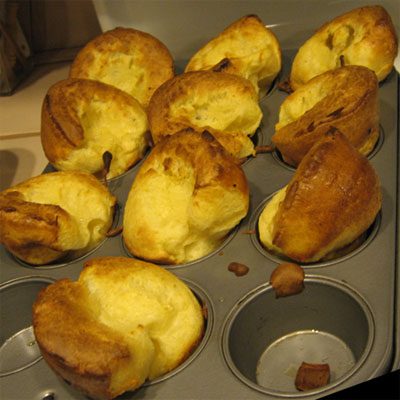 Yorkshire pudding is a traditional accompaniment to Prime Rib and are usually made while the roast is resting. It’s pretty easy to make and it’s cool watching them puff up to their actual size.

Prepare the Yorkshire pudding batter after the roast has roasted for 1 hour, then, while the meat rests, add beef fat to the batter and get the puddings into the oven. While the puddings bake, complete the jus. An accurate oven temperature is key for properly risen puddings, so check your oven with an oven thermometer before making this recipe. Work quickly to fill the muffin tin with batter, and do not open the oven door during baking. Serves 12.