Grilled Octopus with Chickpea Panisse and Preserved Lemon at Bastille in Seattle,
taken with an iPhone 4.

I was in Seattle last weekend to attend the 2nd annual International Food Bloggers Conference (IFBC), but I was a very bad food blogger because I forgot to bring my trusty Panasonic Lumix LX-3 with me on both days. This meant that the only camera I had on me was my iPhone 4. Since it’s always with me, my iPhone 4 is the most convenient camera that I own. When light is plentiful, the iPhone 4’s built-in 5-megapixel camera takes beautiful pictures. The new built-in flash helps in low light, but you really have to work to get a great shot. 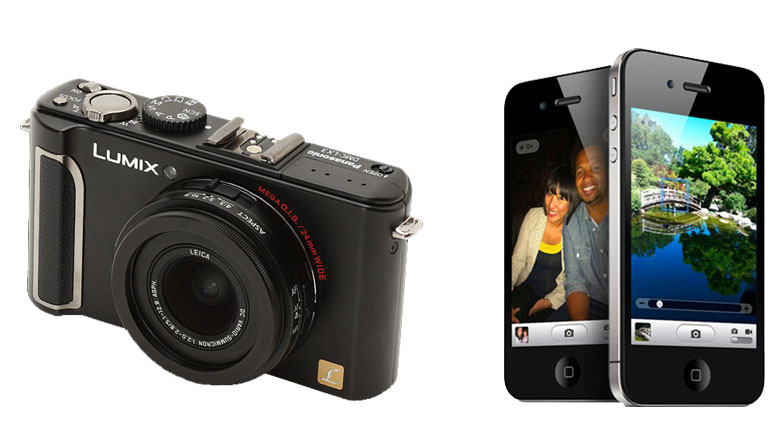 As much as I love the idea of owning a fully loaded digital SLR, I don’t want one because they’re bulky and heavy, and I like to travel light. The LX-3 is a fantastic point-and-shoot camera that’s great in low light and has a 24mm ultra-wide-angle lens that makes it easy to capture fully composed plates of food at restaurants. It also has a ton of manual features, but in general, I just put the thing in “Food” mode, flip the “Macro” switch and go to town. We bought it as our restaurant camera before our trip to New York last year, and nearly every picture on this site since late 2009 was made with that camera.

One of the first questions budding food bloggers ask about cameras is something along the lines of “which digital SLR is the best for food blogging?” While a good camera definitely helps and you’ll need one to take your pictures to the next level, if you don’t have a good eye, then the camera doesn’t matter.

Inspired in part by my fellow IFBC attendees and Saveur Magazine photographer Penny de los Santos, whose images and overall dopeness in the photography session inspired all of us to starting “making” pictures instead of taking them, here are some of my favorite iPhone 4 pictures from the weekend.

We arrived Wednesday night and went to Wallingford for ice cream at Molly Moon’s and burgers at Dick’s Drive-In. Unfortunately, I don’t have any pictures of ice cream because I was too busy eating it, but here’s a picture of the Dick’s Deluxe Burger, shot using only the typical available lighting you’d find at a burger stand at night. It’s not the most attractive burger, but it’s a pretty good macro shot considering the circumstances. 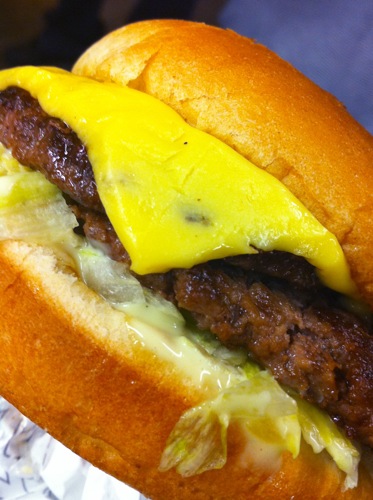 The next morning, my wife and I walked from our friend’s house to Anita’s Crepes in Ballard, and I had one of my favorite things on this trip, the Lemon Sugar Crepe. Fresh lemon juice and the crunchy bruléed sugar made it seem like I was eating candy for breakfast. In this picture, sunlight was coming in from all around but mostly from the right. 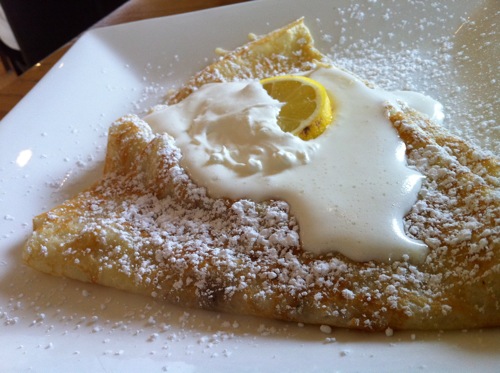 After Anita’s, we headed over to Top Pot Doughnuts in Queen Anne for my favorite doughnuts in the world. I played around with the composition a little here with my Ovaltine latte and lemon old-fashioned in the foreground and my wife’s cup of soy milk in the back. 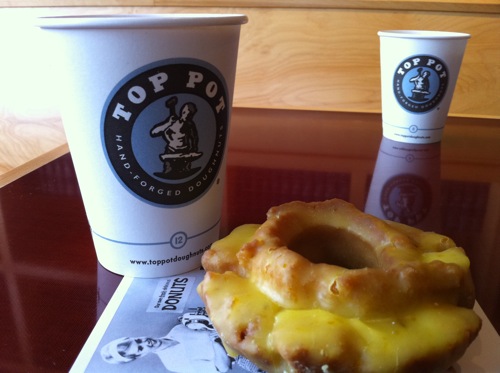 After crepes and doughnuts, we needed to walk around, so we headed downtown and ended up at Pike Place Market where I spotted these colorful hanging peppers being sold by a street vendor (presumably to tourists). :) 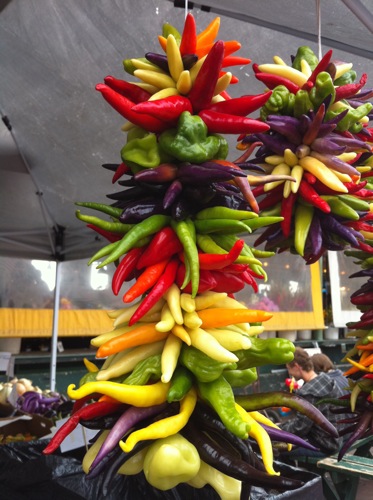 We headed up to Woodinville to partake in one of The Herbfarm’s 100-Mile dinners. All the good dinner pictures were taken with the LX-3, but I did manage to get a nice picture of The Herbfarm’s sign before we went inside for the meal. 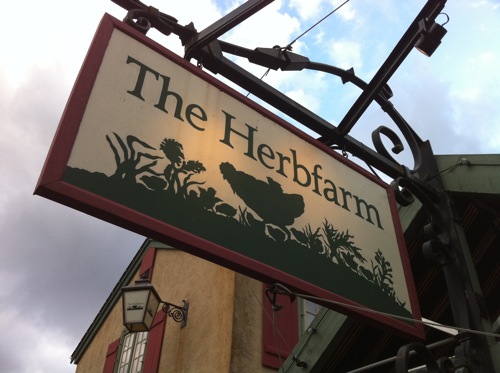 On Friday, we went to Ballard’s Lunchbox Laboratory, a place that destroys any expectations you have of burgers, fries and shakes. The burgers might be excessive and messy, but they’re delicious, and the perfectly fried tater tots with sea salt and pepper are killer. I paired the burger below with a dark chocolate and orange milkshake. 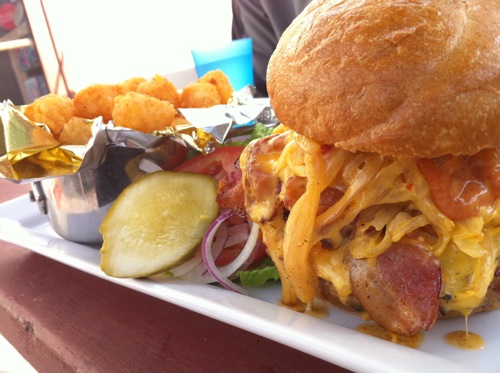 You’d expect us to eat well at a food blogger’s conference, and you’d be right. On the first day of the conference, some of Seattle’s best chefs came out to prepare lunch for us. The marinated octopus dish below is the similar to the dish at the top of this post, which my wife ordered the next evening when we went to Bastille with our friends. 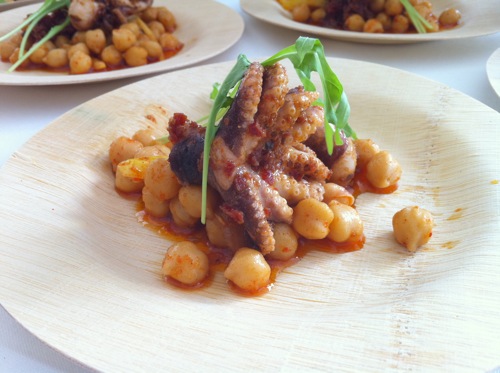 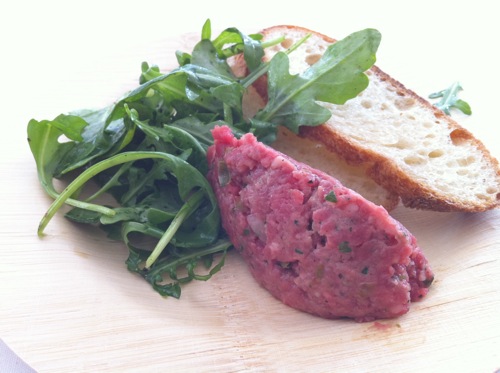 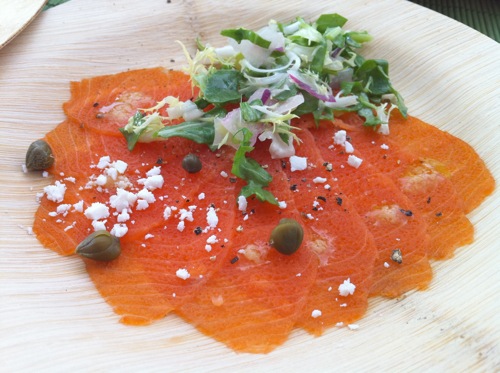 I wasn’t sated after lunch, so I skipped a session and joined an IFBC splinter group that ventured up to Paseo Caribbean Food on my suggestion for some of their famous sandwiches. I was a little late to join the group, and they had already ordered when I got there, but one of them inexplicably (and thankfully) ordered two separate dishes and offered to share her food with me. We took our food down to the Buckaroo Tavern, a Harley bar a couple doors down that’s closing after 72 years in business, so we could sit down and have a beer. The table was crowded and filled with food and beer, but I managed to get off a quick shot before scarfing down half of this incredible grilled pork sandwich. 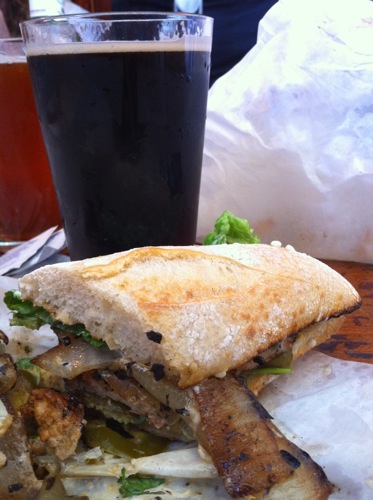 I ended up tweeting this picture, which got more than a few conference goers a little jealous. :) And FYI, if you’ve been to Paseo but haven’t tried their Smokin’ Thighs dinner plate, make sure you order that next time you’re there.

Some of Seattle’s best food trucks served us lunch on Sunday of the conference, which partially made up for the fact that I missed the Eat Real Fest in Oakland that was going on concurrently. I was really happy to see Skillet Street Food there, but I forgot to buy a jar of their famous bacon jam before I left. 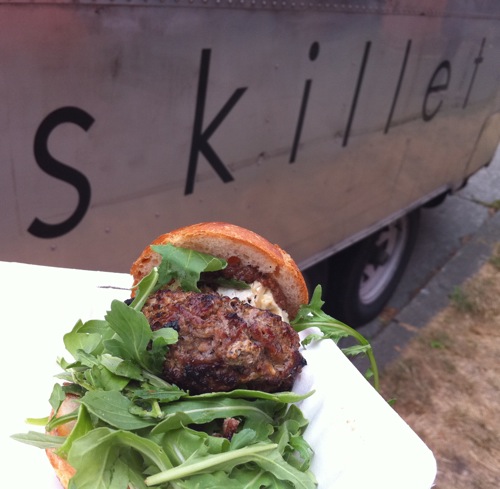 Kaosami Thai Food served up Larb Gai in a Thai taco, something I’d never even I’d never considered before. I thought the Larb Gai was good but it was served on a dismal corn tortilla that made it seem like an afterthought. Despite this, I chose this picture because I’d been inspired by all the overhead shots Penny showed us in her slideshow. 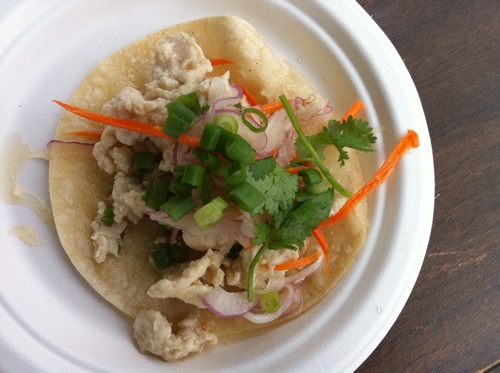 Hallava Falafel seemed to have some logistical issues to sort through when lunch started (in otherwords, their line was slow), but they made a pretty good falafel. I like this picture because it shows that the iPhone 4 camera actually has some depth-of-field capabilities. 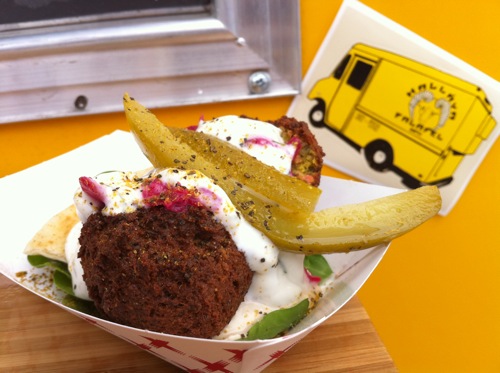 I left IFBC after lunch to meet up with my wife and friends and have an early dinner at Bastille (the eating didn’t really stop for five days). Aside from the octopus we had at the top of the page, two of the more photogenic dishes were the Pork Cheek Terrine and Grilled Heirloom Eggplant. 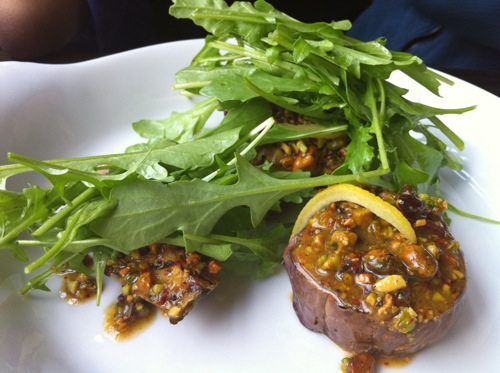 Most of the pictures I posted above were taken in the daytime in broad daylight or in restaurants where we were seated by a window. This is essential if you’re taking pictures with a mobile device like the iPhone 4 because a lot of light is required to properly expose the picture.

An hour after I posted this, Apple announced support for HDR photos in its iOS 4.1. In a nutshell, it takes three pictures—one normal, one underexposed, one overexposed—and then merges them all together. Wish I had that feature this weekend. ;-)

As mobile devices get more advanced, they’re likely to include some form of built-in high-resolution camera, which makes them ideal for the food blogger on the go who might not have their camera with them at all times but wants to take a good picture. Since I’m so forgetful, I definitely fall into this category.