I’m a big Top Chef fan, but I’ve been watching the Chicago incarnation with great interest because of Dale Talde, the ornery and talented Filipino American sous chef at Buddakan, an upscale Chinese restaurant in New York. During the first six episodes of the season, the Chicago native’s dishes have reflected a pan-Asian influence, but last week, Dale got to express his Filipino side during a dessert Quickfire Challenge and received praise and Top 3 finish from guest judge Johnny Iuzzini, the pastry chef at Jean Georges.

Dale chose to make halo halo, a classic Filipino treat of shaved ice, milk (usually condensed or evaporated) and any number of other tropical ingredients, such as sweet beans, tropical fruits, and ice cream. Because of the variety ingredients and personal preferences, there isn’t one set recipe for halo halo, and Dale’s is no exception—a combination of shaved ice, avocado, mango, kiwi and nuts. Sure it was a non-traditional, upscale interpretation, but this is Top Chef, and it was nice to see him bring Filipino culture to the table.

This season of Top Chef hasn’t been nearly as exciting or dramatic as previous seasons, but I still love the show. Dale got off to a slow start, but as the season has progressed, I think he’s found his groove and is now one of the favorites to win. He even showed his “gangsta” side when he grabbed his crotch and went off on Lisa Fernandes after she pandered to Ming Tsai’s “Asian-ness” and then won a trip to Italy despite being negative, whiny, bitch-ass teammate. (Can you tell I really don’t like Lisa?) 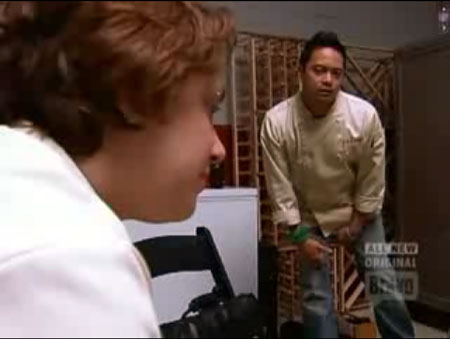 What? You say something?

Are you watching Top Chef? Who do you want to win? Should there be a faux-hawk ban next season?