I had a hard time deciding which pizzas I wanted to try while we were in Chicago. It’s a daunting decision when there are four prominent Chicago pizzerias (Gino’s East, Pizzeria Uno/Due, Lou Malnati’s, and Giordano’s), and I wouldn’t normally eat Chicago-style pizza twice in a month much less twice in five days. In fact, I haven’t had deep dish pizza since our Super Bowl XLI party, which featured food that represented both Chicago and Indianapolis. Complicating matters is that I’ve really come to love Neapolitan pizzas over the last couple years, so would I even have the palette for deep dish?

I settled on only going to Lou Malnati’s because it was a different style of deep dish than what’s available in the Bay Area. Malnati’s trademark is its butter crust, and it didn’t disappoint, but I found the rest of the pizza to be pretty bland. Everything else about the experience was good, especially the spinach salad, which was my favorite dish of the night. 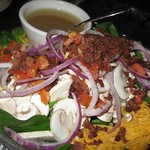 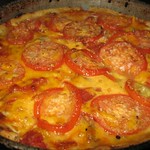 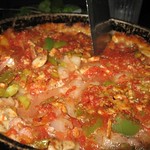 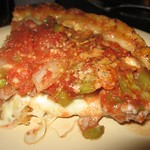 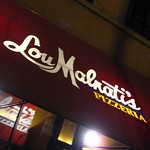 The Malnati’s experience left me as cold as the Chicago weather, and I felt like there was a void that still needed to be filled. We spent our last two nights at the Wyndham O’Hare, and there were Giordano’s delivery menus all over the lobby. Since I wasn’t too keen on spending a day out in the cold, I decided that I would stay in the hotel on Sunday, watch football and have a Giordano’s delivered to the room. 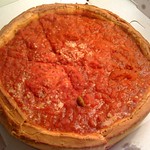 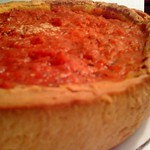 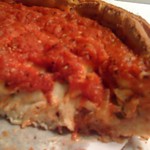 The Giordano’s pizza was infinitely more satisfying than the Malnati’s pie, but it’s also the same style of pie that I’m used to getting at Zachary’s here in the Bay Area. My friend Steph, who’s from the Chicago area, told me she didn’t really like Zachary’s because it tasted “too fresh.” I think the freshness is what I like about Zachary’s rendition of Chicago deep dish. Plus I prefer Zachary’s tangy and acidic tomatoes to Giordano’s milder tomatoes.

I’m pretty sure I’ll be back in Chicago some day, but I don’t really see myself making return visits to Giordano’s or Lou Malnati’s, although I definitely want to give Gino’s East and maybe Pizzeria Uno/Due a try. But if I ever get a Chicago deep dish fix here in California, it’s good to have Zachary’s or San Francisco’s Little Star (my favorite) nearby.

(For those of you wondering…I’m not a big fan of Patxi’s in Palo Alto, but will eat it if it’s in front of me.)

Earlier this year, Zagat was looking for reviews of SF Bay Area restaurants, and people who made submissions would be eligible for a free 2008 Zagat guide. I love free stuff, so I wrote some brief reviews, secretly hoping, of course, that something I contributed would be used in the final printed guide.

I got my 2008 Zagat Guide to the San Francisco Bay Area in the mail today, and being the egomanical whore that I am, I started looking through it to see if they used any of my lines. When I got to the listing for Little Star Pizza in San Francisco, I noticed something familiar:

That line “especially when ‘paired with PBR’ ” jumped out at me because here’s what I wrote in my original review on 4/5/07:

The irony is that I don’t even drink PBR and have always been puzzled by its status as the cool hipster beer. I could also make the argument that they also used my reference to “hipsters” in the printed review, but I’ll let that one go since finding a hipster in San Francisco isn’t very difficult.

So there it is…my little (and anonymous) contribution to the 2008 Zagat Guide. It’s not much, but it’s something.

For the record, here’s the little ditty I penned for my Yelp review of Little Star:

For our Super Bowl XLI party, we decided to showcase foods from both Chicago and Indianapolis.

Originally, I thought of ordering some frozen pies from Lou Malnati’s or Geno’s East, but that wasn’t a very cost-effective option. Luckily, the SF Bay Area has some pretty good Chicago-style deep dish options. We ordered one pie from Zachary’s in San Ramon and one from Patxi’s in Palo Alto. (Read my Yelp reviews for Zachary’s and Patxi’s, too.) 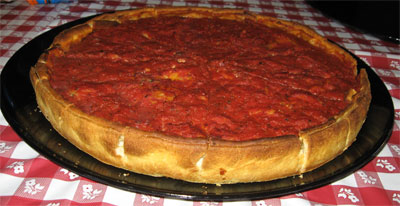 We used panko for the breading and Colombo’s potato dinner rolls for the “buns.” The final results were awesome and nearly outshined the pizza.

Now if only the game was as good as the food…