The thing I love most about Ad Hoc is that you never eat the same meal twice, and this was no exception. I’ve noticed from looking at the menus that they’re coming up with some really interesting first courses that deviate from the traditional soup or salad paradigm.

As I was getting out of my car, I ran into Nessim, one of Ad Hoc’s lead servers, and he asked me if I wanted to meet Claire Clark, the former French Laundry pastry chef who’s spending time at Ad Hoc making desserts before going back to the U.K. This was an unexpected treat since we were there specifically to try her dessert course. I also reconnected with Chef de Cuisine Dave Cruz, and he was kind enough to send over an additional course to our table in between the first and second courses. 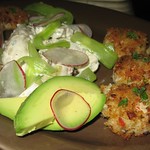 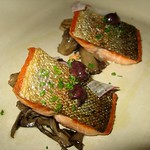 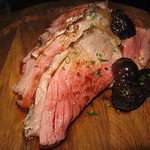 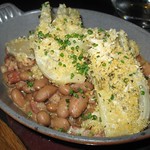 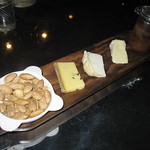 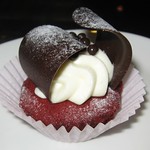 The crab cakes were outstanding. They were fresh and free of any flour “filler”—just crab with seasoned panko to hold it together. It was served with some nice fingerlings in remoulade and some avocados cooked sous vide, which made them even creamier.

The lamb was local and less gamey than the Colorado lambs that Ad Hoc sometimes gets, which I liked. It was served with fennel gratin and Borlotti bean ragout that the entire staff was raving about, and it easily outshined the lamb although it was a tad salty for me. My wife, who loves salty foods, had no complaints.

The red velvet cupcakes were smaller than a typical Ad Hoc dessert, but when they’re this pretty, does it really matter? Technically, this was a great cupcake. It was dense (by design), and the texture reminded me of pound cake . The white chocolate and cream cheese frosting had just the right amount of sweetness and the Valrhona chocolate pearls added some crunch to it. However, I’m coming to the realization that I just don’t like red velvet cake. I think my eyes see red cake and expect something bold, but the flavor is always much more subdued.

Or maybe I just don’t get it and that means there’s more red velvet cake in the world for the rest of you. :)

I came upon the recipe for Double Dark Chocolate Cupcakes with Peanut Butter Filling at Food & Wine’s Web site while doing research for a cupcake contest I was planning on entering about a month ago. Eventually, laziness set in and I didn’t enter the contest, but these cupcakes were still on my mind. When our friends decided to have folks over this past holiday weekend, I thought it would be a good time to break out some cupcakes. I love the double-dipped ganache topping as opposed standard frosting. It’s much easier than making frosting, and the cupcake has a lower profile so it’s easier to eat. The peanut butter filling was really good too, but I ended up getting a little sick to my stomach after OD’ing on peanut butter while I was making it. :-) Credit must be given to my wife for making these cupcakes look so good. I tasked her with doing the ganache and dipping the cupcakes. She’s really good at making things pretty. END_OF_DOCUMENT_TOKEN_TO_BE_REPLACED

I want you to imagine a moist devil’s food cupcake, filled with flavored whipped cream (let’s use banana for this example). Now dip it in chocolate ganache to seal it, top it with an additional flourish of banana whipped cream and then garnish it with a slice of roasted banana.

Dainties Cupcakes are really a misnomer…but this is a good thing. The devil’s food cake and the chocolate ganache give the cupcakes a heft (without being heavy) that you just don’t get anywhere else. It makes these cupcakes — dare I say — manly!

All of Dainties cupcakes have the same base of moist devil’s food. They differ by their cream fillings. We ordered the Creme de Menthe, Tiramisu, Maple and the Stupid Chocolate.

The best of these was the Maple…just an incredible flavor combination with the devil’s food. The Tiramisu was also excellent…the cream reminded me of the mocha frosting at Goldilocks, only denser. Creme de Menthe was a really nice, subtle mint flavor. Then there’s the Stupid Chocolate, which adds dark chocolate chips to the cake, is filled with vanilla cream, then dipped in chocolate ganache twice. It’s topped with more vanilla cream and chocolate shavings. It gets its name because it’s a stupid amount of chocolate.

The actual storefront doesn’t look like much and the main signage says Flatbush and J, the catering company from which Dainties spawned. You’ll likely be greeted by Chef Bill Dertouzos, a Brooklyn native who’s the mastermind behind these amazing creations. Bill was very cool and gets extra props for giving us a sample of the roasted banana cupcake mentioned above. He said he was very proud of that creation, and he should be. It was our favorite cupcake of the bunch.

Finding Dainties is a little challenging. The address is on Santa Monica Blvd., but the entrance is actually on the side street. The easiest way to find it is to look for Winchell’s, then walk around the corner and Dainties is right there. I went there the other day and saw that they added a new mural on the wall near the entrance celebrating being named Best Cupcake by Los Angeles Magazine, so that should help you find it also.