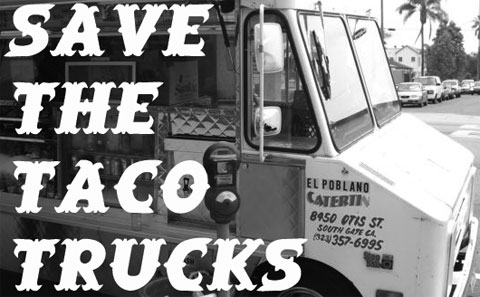 First, the bacon hot dog carts, and now taco trucks? What the hell is going on in L.A.?

Chowhound’s C. Thi Nguyen had an Op-Ed piece published in the L.A. Times a couple weeks ago detailing the new regulations passed by the L.A. County Board of Supervisors that would basically put taco trucks in unincorporated parts of L.A. County out of business.

On Wednesday, the supervisors passed a harsh set of regulations for unincorporated county areas. Parking a taco truck in one spot for longer than an hour is now punishable by a fine of up to $1,000, or six months in jail, or both. Developers and restaurant owners, particularly in East L.A., are pushing for tougher enforcement too. These changes, say some truck owners, will probably put them out of business.

This is a cultural disaster. Forget the Getty — it’s the taco trucks, and their crowds, that are the true culture of L.A. Attacking the trucks is like New York going after its hot dog stands or Memphis banning barbecue pits.

What’s the motivation for these new rules? Competition.

Ron Mukai, an East L.A. developer, says the trucks are unfair competition, edging out the “legitimate brick-and-mortar businesses.” But the county’s 14,000 registered catering trucks seem just as legitimate as restaurants — they’re just providing a different service. Restaurants provide meals, and a table to eat them at, and walls to eat them within. Taco trucks provide food, pure and simple. They charge less because they’re selling less.

If I’m looking for food on the run, I’m not looking for a sit-down restaurant. I want something good, fast, and cheap, and if that happens to be the neighborhood taco truck, I’ll be first in line. It’s a lot better option than fast food.

But class is also at the heart of this issue. Nguyen puts it best:

I’m not really sold on the effectiveness of online petitions, but if you want to sign one or are interested in more information about this fight, go to www.saveourtacotrucks.org.

Let this Cinco de Mayo be about FREEDOM!

One reply on “L.A. Adds Taco Trucks to War against Street Food”

[…] already seen this in Los Angeles, and truth be told, similar disputes have been going on for years in much smaller California cities […]