We headed for a stroll in the Victory Gardens, an impromptu garden of fresh vegetables that was set up in the middle of the Marketplace. I loved this display because it always good for people to see how their food is actually grown. I honestly think that there are scores of people, especially kids, who don’t know (or remember) that their food is grown in dirt since they only see it in supermarket displays.

We left the Victory Gardens and ended up finding a place to sit and people watch…right next to the Let’s Be Frank hot dog cart. Since we’re not in SF or LA all that often to catch one of these hot dog carts on their normal days, this was a great opportunity to try one their all-beef, grass-fed, pasture-raised, and “heart-healthy” hot dogs. They were offering their standard Frank Dog and a Devil Dog, a Frank Dog with spicy pepper relish. I decided to go for it and ordered the Devil Dog with onions, and dressed it with brown mustard and ketchup. The Devil Dog was really good but really spicy. My mouth was on fire. I had to take out the three chili peppers that I found nestled in the bun just so I could finish the hot dog. As the event wound down for the day, so we started our trek back to BART, but I was still longing for something to cool down my mouth. Luckily, Straus Family Creamery had a booth in the farmer’s market, so I went over there and got an ice-cold quart of their organic Cream Top 1% milk before they closed for the day. Nothing works as well as ice-cold milk to cool down some spicy food, so I was glad Straus was there to provide some instant relief. 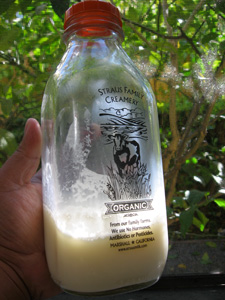 The Slow Food Nation Marketplace was really crowded, which was great for spreading the message, and it was nice to see the interest about this important movement. (Although, in San Francisco, this event is basically a no brainer.) The only drawback was that many of the food booths were sold out by the time we got there. We still had a good time and got to eat some great food…and if that’s not the point of Slow Food Nation, then what is?

“The Slow Food Nation Marketplace was really crowded” is a bit of an understatement.

We went to the event on Sunday night. It was a total ripoff. For the $120 we spent, we could have had a great dinner at Millennium. It would have taken about as long, too, except that we would have been comfortably lingering over our wine instead of jockeying for position in lines. The lines were so long (and so poorly marked) that we didn’t even make it to four of the pavilions, and we got there at 5:45PM. Of course, it didn’t help that they made the classy, CLASSY move of shutting down the Gelato and the Coffee pavilion at five-minutes-til-closing. I mean, who out there paying $120 for a food event would ever want to have ice cream and coffee at the end of the evening? This was a total ripoff and I can’t believe that I got suckered into paying $120 to stand in line at a giant infomercial.

@sf’er: Wow…that sucks. I was kind of bummed to missing out on some of the other stuff that was going on, but now I’m glad I went to the “free” event at Civic Center Plaza.

Strangely enough, in contrast to sf’er’s experience…I had a great time all around. Perhaps it was just the luck of the (session) draw, but after going to one of the Friday lectures at Herbst Theater, the Civic Center right after, and the Sunday AM session of the taste pavilion, I couldn’t help but remark as how well organized and *not* horrendously packed each of the venues were.

I was prepared for the worst at the Taste Pavilion, especially since we arrived to a 4 block line before entering. But once in, we were able to sample pretty much every pavilion without too much hassle. Sure there were some longer waits, particularly for ice cream and wine, but nothing I’d call unreasonable. We entered the cheese tasting line when it was out the door…but still managed to clear the whole thing in under 10 mins. We ate until we were content and even managed to have enough slow bucks leftover to take home a good amount of chocolates.

In any case, timing and luck certainly played a role…but there were definitely gems to be found. Arnold, did you happen to catch the Benton’s hams or the Salumi Artisan Cured Meats booths? Both were rare treats in our neck of the woods.

Thanks for that perspective, AJ.

I don’t remember if I saw those booths or not, but I’ll keep those names in mind. :-)

I too was incredibly disappointed when there was no Ici booth. What happened?!