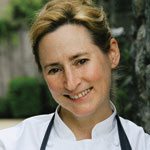 I recently heard that pastry chef Claire Clark left The French Laundry to go back to her native UK after more than three years at Thomas Keller’s crown jewel. But before she goes, Clark is spending her last few weeks dropping knowledge at Ad Hoc, Keller’s “casual dining” restaurant.

Apparently, she started at Ad Hoc a couple weeks ago and will likely only be around for a couple more, so you if you’re a Claire Clark or Ad Hoc fan, you might want to head up there soon. But even if you miss her, Clark’s influence should have a lasting impression on Ad Hoc’s dessert courses going forward.