We were in Kauai for a wedding last weekend and didn’t have much time to explore the island and all its beauty, but we did our best to eat well. Here’s a rundown of our brief stay on the Garden Isle.

Hawaiian Blizzard is a shave ice stand that sets up shop Mon-Fri from 1:30-5pm in front of the Big Save market in Kapaa. We landed in Lihue at around 3pm Friday and went straight to Kapaa to get some shave ice before driving down to our homebase of Poipu, and it was definitely worth the trip.

If shave ice was judged on purely on the ice, Hawaiian Blizzard might be the best in Hawaii. Yes…better than my Oahu favorites, Aoki’s and Waiola, and it makes Matsumoto look like a regular snow cone. It’s the lightest, fluffiest and most divine ice I’ve ever had. 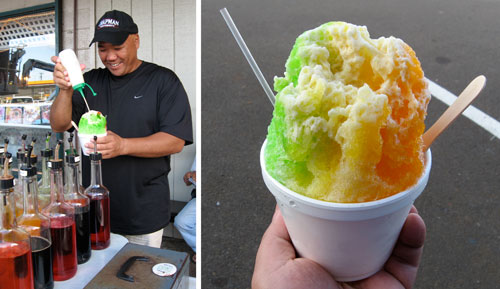 Flavor selection is pretty standard, but I was excited that they had Melona, which in my mind is the perfect shave ice flavor. They might not have the flavors and varieties that the other guys offer, especially pretty standard add-ons like red beans or vanilla ice cream, but you can also opt for a “Snow Cap,” a drizzling of evaporated milk on top of the shave ice that’s a delicious alternative.

Hamura’s Saimin is what’s great about eating like a local in Hawaii. It’s cheap, the service is friendly and fast, and even though the place looks like a hole in the wall, the food makes you forget your surroundings and focus solely on the amazing meal that’s sitting in front of you. Also, if you see tons of locals eating there alongside the tourists, you know the place has to be good.

My wife and I aren’t the biggest saimin fans, but if we lived in Kauai, we’d definitely be regulars. My main problem with saimin is the broth. A bowl of L&L saimin I had a while back reminded me of dirty socks. Hamura’s broth was delicious and erased that crappy bowl of saimin from my memory. We both ordered the Special Saimin and feasted on the roast pork, thin slices of ham, wontons, kamaboko, vegetables and hard-boiled egg that topped the perfectly cooked noodles. 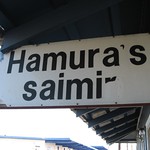 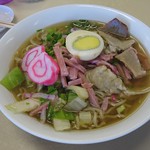 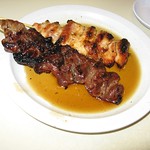 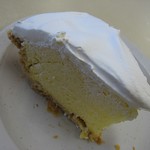 We also ordered a couple of meat sticks (beef and chicken) and a perfect piece of tempura shrimp. We finished off the meal with a slice of their lilikoi (passion fruit) chiffon pie, which was light and airy…perfect after all the other food we had just polished off.

If you’re in Kauai, Hamura’s Saimin is probably the one place that you MUST visit. Otherwise your trip just isn’t complete.

We didn’t actually eat at Gaylord’s, but they did cater the wedding. Bottom line…it was the best wedding food we’d ever had.

We started with some nice pupus, including a delicious hoisin duck breast served on a wonton chip, and a nice Thai Chicken egg roll. The entree was surf-and-turf, featuring Filet Mignon with Madagascar Sauce and Sugarcane Skewered Shrimp served on a bed of mashed potatoes.

The filet was the biggest, thickest and best steak I’ve ever had at a wedding. It was cooked perfectly rare and it was tender and delicious. I actually got to eat two of them because they guy sitting next to me didn’t want his because it was too rare. The shrimp was good, too, but I was really excited to get a second filet.

If you’re planning an event on Kauai and you need a caterer, you should definitely give Gaylord’s a call.

I should have known we were in trouble when we arrived and they told us to seat ourselves, but the only empty tables still hadn’t been cleared from the previous diners.

We sat at a table and started stacking dishes so we would have some place clean to sit. A few minutes later someone eventually came by to clear our table and take our order. You may be wondering why we didn’t leave when we saw this situation, but to be honest, I was distracted by the two huge TVs showing the Giants v. Cowboys that I didn’t mind waiting because I could watch football.

I had the loco moco, a standard dish that I use to gauge a restaurant’s competency. It was pretty good, but I thought the gravy was too peppery.

My wife’s chicken cutlet (one of her benchmarking dishes) was ordered with over easy eggs and when they arrived, the eggs were missing. When our waitress told the kitchen staff about the mistake they had a brief “discussion” about whether or not eggs came with her order, regardless of what was written on the ticket. The eggs came a few minutes later, but I don’t think it really improved what was already in her bowl.

What looked promising when we drove by the restaurant on our way to Waimea Canyon ended up being a major disappointment in the end. Just like the Cowboys, who went into the locker room at the half tied with the Giants 14-14 and ended up causing my second disappointment of the day by losing and eliminating themselves from the NFL playoffs.

Nice selection of reviews. Just a few things to add as a local guide… yes, Hamura’s is great BUT have they cleaned up at all? That is the only problem I hear about and had seen myself a little over a year ago. Grinds deserves a higher rating. The staff is great and most all the dishes I have tried are excellent. It’s a great stop on the way back from the west side or Waimea Canyon. Gaylords’s awesome. Hawaiian Blizzard awesome. So much more on Kauai that is da kine, try Shaka Tacos and Blossoming Lotus in Kapaa!! Hukilau Lanai is one of my favorite restaurants. Fish Express in Lihue is great for nice lunch plates and bento boxes. Go Kaua’i!

Funny thing is that cleanliness is the furthest from my mind when we eat at local places…but we got to Hamura’s right when they opened to it looked fine to me.

Grinds must have been having a bad day or something. It was definitely the low point of our stay in Kauai.

I wish we had more time to check out all the other places you mentioned. If we ever make it back to Kauai, we’ll definitely check them out.

I would kill for a that shaved ice right now!
BTW, I went to ad hoc last weekend (post to come…I am a bit backed up right now). Our server’s name was Nessim and he said he knows you. The food was fantastic!!