I found this recipe in an article on SFGate.com while putzing around the Web. It’s from Tita’s Hale ‘Aina restaurant in San Francisco, but they closed a couple years ago. Don’t see why their recipe shouldn’t be shared with the world, so here it is. 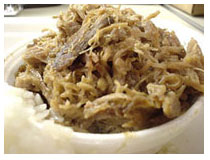 Towards the end of our last trip back to Hawaii, I was craving something fancy, and the other “upscale” restaurants in town (Sam Choy’s, Roy’s) got mixed reviews from everyone I had talked to. Only Alan Wong’s Restaurant got universal praise, and it’s hard to argue with a place that’s garnered so many accolades, including the prestigious James Beard award.

We thought about ordering the 5-course prix fixe chef’s tasting menu ($75), but decided to eschew its rigidity in favor of ordering directly from the menu. This actually saved us money, and we got to eat exactly what we wanted.

We started off with the Nori-wrapped Seared Tempura Ahi, garnished with soy mustard and tomato ginger relish. It was beautifully presented and a great way to start the meal. Next were the hoisin BBQ ribs, which were a little sweet but completely decadent. The succulent rib meat was easily to separated from the bones using either chopsticks or a fork.

The entrees were the main attraction, and they were all so pretty when they arrived at the table. My sister-in-law had the Twice Cooked Short Ribs, Soy Braised and Grilled “Kalbi” Style with Gingered Shrimp, Ko Choo Jang Sauce. This was just about perfect. My wife had the Ginger-Crusted Onaga, a long-tailed red snapper served with a Miso-Sesame Vinaigrette, which she really loved. I had the Macadamia Nut-Coconut Crusted Lamb Chops with Roasted Garlic Mashed Potatoes and Asian Ratatouille. I wasn’t too into the Ratatouille, but the lamb chops were delicious, probably the best I’ve ever had and the sauce was great with the mashed potatoes.

After dinner, we were given a coffee menu with a selection as diverse as any wine list. I opted for the chef’s current favorite, an Organic Lafayette Coffee from south Kona, which was delicious, although some grounds got into my cup through the French press.

For dessert, we ordered the Taste of Hawaii Cheesecakes, which was pretty good, but only two of the four flavors really stood out, the Kona Coffee and the purple Okinawan Sweet Potato with Haupia sorbet. We also ordered the Chocolate Crunch Bars, which were like gourmet Kit Kats. This was the perfect way to finish the meal.